I've already talked about this with many of you. I've been watching hours of people doing the algorithm march.

The internet told me how to get the sound from a youtube video so I got the mp3 for it and also the mp3 for a remix that someone made.

Beth and I and some other friends are going to do it during Rush at school and see if people join in. BWAHAHAHA Just say 'yes' to getting people to do stupid things. I like masses. I am a true Chinese.
Posted by mirthbottle at 12:32 AM 3 comments:

by the way people should go to the comedy central website and watch barack on the daily show.

i been reading and posting on the obama facebook group. i particularly like my answer to the question, would I vote for Ron Paul?

no, i would never vote for ron paul.

personally i think a lot of so-called libertarians don't know shit and just like the word freedumb.

people who believe free-markets solve everything really makes me hate democracy. part of me would really like it if people had to take some kind of test before they vote. democracy only works if people who vote are educated and vote based on things that are true.

to set the record straight.
yo, free market is only efficient if certain conditions are in place. for one, there needs to be competition. second, demand must exceed supply.

for healthcare, often there is not competition because in many towns there is only one hospital or healthcare provider anyway, or at least only one that is a reasonable distance from where you live. also, demand is time sensitive. since nixon, healthcare is mostly privatized and free market is very efficient, in a way. the problem is that there is a conflict of interest. that is, health care providers profit when people get sick and buy their "products." insurance companies profit when people don't get sick but pay them anyway. sure, if you figure out a way for companies to profit when people stay healthy, then free-market economy could work although it's still not like there are competitors in your area.

this is also true for utilities. you do not get to choose what utilities company you want to use. that is why prices are regulated. you also usually do not get to choose what internet provider you use, but it is not regulated, but dammit, it should be. it costs comcast almost nothing to provide internet access, but they charge $60/month. their profits make me tremble with rage.

there is also a huge problem with free market agriculture. the problem is that supply easily surpasses demand, driving prices way down. before nixon? the US gov't used to have storehouses of grain, which would buy grain from farmers if there was a surplus, thus keeping prices stable. in shortages, they would sell it again. this is how it was done in china, too, during feudalism and probably many other places. they got rid of that. now, we include grain as part of mexico's wto package, ruining their economy in order to keep ours in tact. (and then we complain about immigrants that the agriculture business and restaurant business depends on.) this is part why agriculture in america is really messed up right now.

SO FUCK ALL YOU FREE MARKET LIBERTARIANS.
ron paul was a doctor not an economist.

on the other hand, i do know a few very intelligent libertarians who are not so much free-market, anti-gov regulations people, but do believe in decentralizing, strengthening state jurisdiction. because it is probably true that the central gov't is bloated right now. it is inefficient. it oversteps bounds. the mechanism that states get resources is almost totally crooked.

there is a case for less federal control of education and more state control. for the states that are lagging, though, my lib friend agrees that the idea would be for the fed to give that state more money and give educated people incentives to go teach there (which obama advocates. that is part of why she is supporting him). but the state ultimately gets to manage the money.

i still think ron paul is the best republican candidate, haha. he believes in scaling back the military, and it's not like anyone would implement his free-market reforms...especially if there is a dem controlled congress.

actually, if it were clinton vs. ron paul, i'd probably vote for ron paul. but he's such a dirty libertarian.
Posted by mirthbottle at 12:27 AM No comments:

so me and lynn were talking

we don't really know what to call white people's parents and grandparents
in chinese it is standardized.

not so simple in the west (or maybe it is, and we don't get it)
mr and mrs sounds too formal, and mom and dad sounds kind of presumptuous.

the answer? this is always my gut feeling

how about mrs grandma!!!

how are you doing, mr. dad?
Posted by mirthbottle at 10:33 PM No comments: 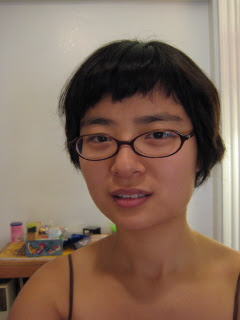 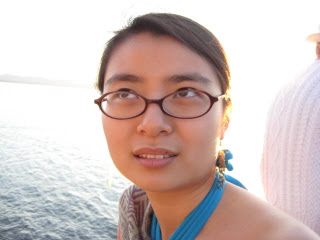 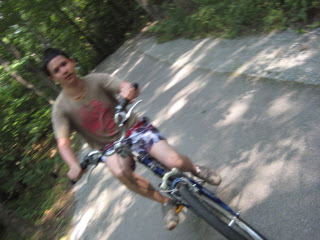 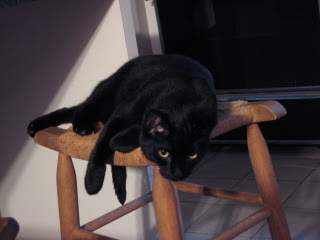 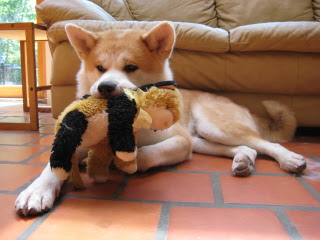 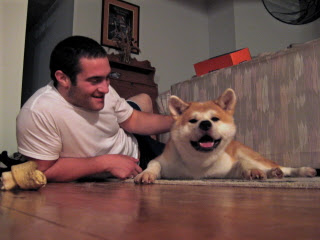 These are some pictures. Toby learned how to ride a bike in Vermont, and so we went on the trail. It went along a mountain stream and so we stopped to take a dip in the stream before heading back.

We also went to Toby's house to house-sit and take care of his parents' animals. They have a dog and cat.

Then when I got home, I gave myself a haircut.
Posted by mirthbottle at 7:44 AM No comments:

watch it!
Posted by mirthbottle at 11:52 AM No comments:

haha
hey, read/listen to the speech

these are my thoughts about it. I send them a message, hehe

This speech shows how well Obama understands the current state of the world and the fundamentals behind how terrorism and conflicts arise. That is, terrorism is bred out of poverty and desperation. This is also the stance of the Chinese government, and that is why they believe in investing in the development of the rural provinces in China as well as around the world.

On one hand, I understand that many Pakistanis are
concerned about a breech on their sovereignty. It is true that Musharraf's support of the US is very unpopular at home, and it would be bad to aggravate that situation. However, it is my understanding that Obama does not accuse Pakistan of supporting terrorism as a state. Also, he offers to "help Pakistan invest in the provinces along the Afghan border." Economic and social support can show Pakistanis that the US acts in good faith. I would also hope that the support we provide isn't just US propaganda in the form of "secular education." I think that concern is also what causes Pakistani people and Muslim people in general to distrust US intentions.

We need to remember that the terrorists who cross the border to Pakistan to hide should be deem criminals under Pakistani law and prosecuted. If the state is not strong enough to uphold the law, then it is not an unreasonable request to allow US pursuit into Pakistan.
Posted by mirthbottle at 2:30 PM No comments:

an article from US News

on trade: not protectionist, but believes in supporting american workers to better compete in the global economy.

on taxes: the usual, but specifically mentions what he considers good things that clinton and reagan did.
Posted by mirthbottle at 3:56 PM No comments: